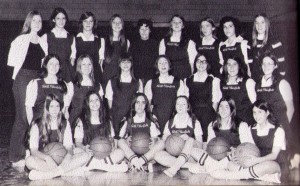 I’m not much of a sports fan and I didn’t watch the Olympics, but I did catch a few après Olympics interviews with some of the women competitors. When asked what contributed to their success, some of them paid homage to Title IX – and the girls who first competed when finally allowed by this piece of legislation.

What is Title IX, Anyway?

Title IX, also known as the Patsy T. Mink Equal Opportunity in Education Act, is part of the Education Amendments of 1972. Enacted on June 23, 1972, it states that:

“No person in the United States shall, on the basis of sex, be excluded from participation in, be denied the benefits of, or be subjected to discrimination under any education program or activity receiving Federal financial assistance”

Suddenly, out of nowhere, we were given the opportunity that I had never imagined. For the first time, girls could participate in high school and college varsity sports. Girls now take it for granted that they can participate in these sports. I took it for granted that we couldn’t – wouldn’t ever compete like the boys – and somehow never even questioned it. Now I was trying out for the girl’s varsity basketball team.

Suddenly the girls Varsity – JV teams were formed. Everything was second rate. Our uniforms were somewhat ragtag. We practiced wherever the boys did not – almost always half-court – at a grammar school. Sometimes we got lucky enough to practice at home on our full court when the boys were away. It seemed as if there were more of us at the games than there were spectators in the stands, and the scores were terrifically low.

It’s funny to now be thought of as pioneers. As for me, I was just doing something I loved – playing basketball – warming the bench, mostly. Now, I do look back and feel proud to have been part of what has turned out to be something inspiring to those who came after us.

Sometimes, just by being who you are and doing what you love, you’re changing the world without even knowing it. You’re making a difference to someone whom you will never know.

Sometimes, you can’t tell the impact of your actions until you look back. Maybe, just maybe, what you’re doing now is making a big difference. You’ll just have to wait and see.

By the way, in that picture at the top of this post – I’m the second from the left in the front row, holding a basketball.